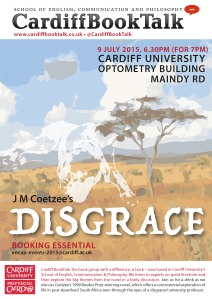 On 9 July, BookTalkers gathered for tea, presentations and discussion on the Booker prize-winning novel Disgrace (1999) by the Nobel prize-winning, South African novelist JM Coetzee. David Lurie – a divorced university lecturer – has a sexual relationship with a student, is dismissed from his position and then retires to the remote farm of his daughter, Lucy. Following a devastating attack at the farm, he struggles to recover from both his and his daughter’s physical and psychological injuries. Possibly searching for redemption, he volunteers at Bev Shaw’s animal clinic, helping to euthanize dogs. In the novel, Lurie speculates that the attack on him and his daughter might be motivated by ‘a history of wrong’. This seems an apt way to characterise and conceptualise this dark work as a whole. Later made into a film starring John Malkovitch (2008), Disgrace is a disturbing and deeply political book about life in post-apartheid South Africa. It is also a powerfully multi-layered exploration of justice, education, sex, ageing, race, gender and the relationship between humans and animals. Our speakers were Dr Howard Barrell, Dr Jamie Castell and Prof. Mara Miele.

You can read the posts for the event below: