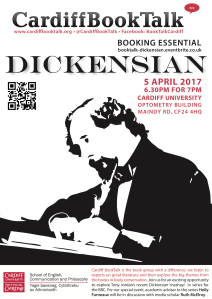 The fifth BookTalk of 2016/17 offered a break from the usual format and we screened the first episode of Tony Jordan’s Dickensian (2015), a Victorian mashup series based upon the novels of Charles Dickens. Across twenty episodes, the series reimagined and threw Dickens’ iconic characters into a melting pot together that enabled new stories to be cast from familiar plot lines.

Our speakers for the evening were Prof. Holly Furneaux, who had worked as an adviser on the Dickensian series, in conversation with Dr Ruth McElroy.

You can read the posts for the event below: