For the second event in our 2016/17 calendar, BookTalk was delighted to welcome Cathy Rentzenbrink to discuss her bestselling memoir The Last Act of Love, in conversation with Professor Jenny Kitzinger from Cardiff’s School of Journalism, Media and Cultural Studies. The evening was supported by the Cardiff-York Coma and Disorders of Consciousness Research Centre, and focused on Cathy’s experiences of reliving and recording the world-shattering situation of her sixteen-year-old brother Matty being knocked down by a car, and the following 8 years of his life spent in a persistent vegetative state.

Jenny began the discussion with perhaps the most fundamental question: Why did Cathy decide to write the book in the first place? In her characteristically engaging, mildly self-deprecating manner, Cathy replied that she had not wanted to write a book like The Last Act of Love at all – her interests had been directed towards fiction, and novels in particular. However, she discovered that in whatever she wrote, the ‘plot’ of her past would break through into her creative present, a seemingly cruel rejoinder to her belief that she had ‘mourned enough’. Eventually, at a friend’s suggestion, she started to add more details to this insistent plot, and it slowly grew into the memoir. It was, literally, a life’s work being brought to the page. 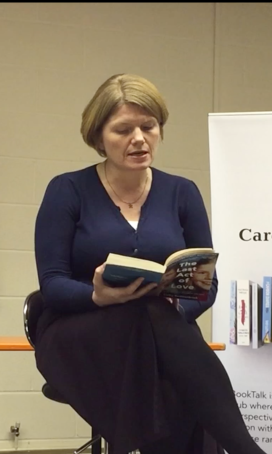 Cathy explained that the accident itself, as well as details from Matty’s funeral, were the easiest sections to compose, and were subsequently written down first; much harder were those sections which dealt with the aftermath, the 8 years of seemingly inexhaustible emotion, running from despair, through uncertainty before arriving at a painful resolution.

After her first reading, Cathy provided some context to her discussion of the prayer tree which opens the book. Many of the prayers affixed to this tree find expression in the book, either directly or through a recognition of the pattern of themes which emerged from the branches. For Cathy, there is something profound in this idea that people who might otherwise never have been connected, and who would probably never meet each other, could still be rooted in this capacity for expression. From here, the discussion moved forward to Cathy and Jenny’s first meeting in Cardiff. Guilt had been Cathy’s constant companion for some time, stemming from her feelings and remembrances of the accident and its aftermath. It was at this time that Jenny questioned Cathy as to whether her parents should also feel (or be expected to feel) this same guilt, to which the answer was an emphatic ‘No’. This realisation allowed Cathy to begin dealing with this idea of guilt-by-proxy, enabling her to come to terms with her complex response to the family’s decision to remove Matty’s life support, which led to his death in July 1998.

The next point of discussion concerned the impact of the book. Jenny was keen to stress the social importance of a text such as this, which brings into focus a series of concerns and potential taboos surrounding cognition, quality of life, and death. Cathy’s reply focused on the multitude of correspondence she has received from people who have read the book, and are experiencing the same or a similar situation. A variety of professionals who operate within the area of disorders of consciousness (from medical staff through to insurance officials) have expressed their appreciation for The Last Act of Love, both as an essential insight into the human dimension of the cases with which they deal, and as a recommendation they can make to patients and clients. As well as being a deeply personal memoir, it has assumed an alternative role as an encapsulation of emotion to which people can direct their own experiences. Indeed, this idea of emotional support is also the focus of Cathy’s follow-up book; called A Manual for Heartache, it aims to ironically subvert its own title by suggesting that there is no ‘manual’ or schema for dealing with those intense emotions which seem to bypass comprehension. Just as The Last Act of Love demonstrated, it is not so much a question of vanquishing grief, but rather, in the words of her publisher, ‘how we can emerge from suffering forever changed, but filled with hope.’

During the Q&A session, audience members asked a series of insightful questions, ranging from the role of religion in the book, to the reaction of her family when they learnt it was being written, and finally to ideas about memory and recollection of events, and whether the act of remembering and recording in some way alters the very thing they try to preserve. Cathy kept a central focus on the importance of family during her answers, saying that her parents’ understanding and support was essential to her writing their story down. She also suggested that it is not simply in the words, sentences and paragraphs that she finds the remembered details of Matty and their childhood; they re-emerge in the behaviour of her own son. His refusal to put his shoes on properly is just one reminder of Matty, so that the layers of memory to which Cathy returns are both textual and, in a very real sense, deeply personal.

Jenny drew proceedings to a close by discussing the work of the Coma and Disorders of Consciousness Research Centre, of which she is co-director with her sister, Celia, and which aims to explore the cultural, ethical, legal and social dimensions of coma, the vegetative state and the minimally conscious state. You can read more about the work of the Centre here.

Much like Cathy herself, and the incredible story of The Last Act of Love, the event was tremendously engaging, humorous and heartfelt.